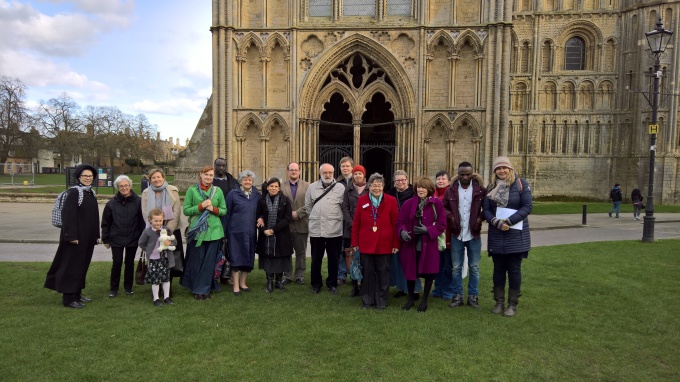 John was formerly Chairman of the Orthodox Fellowship of St John the Baptist. He was born in Wakefield and was a scientist, graduating at Oxford in Physics in 1966. He retired in 2004 after 27 years’ service at Stamford School in Lincolnshire. Colleagues have spoken warmly of John and his work, one saying it was a privilege to work with such an expert physicist.

John began his long association with 2, Canterbury Road at Oxford, living there when Donald Allchin married him to Marilyn in 1966 and the wedding reception was held in the garden. John and Marilyn had 3 children and 9 grandchildren, to whom he was devoted.

John encountered Nicholas Zernov and the Orthodox Church at Oxford, but it was not until 1988, when he felt able to travel for services, that he was received into the Church by Father Barnabas of New Mills, Wales.

John cared deeply for the Orthodox Fellowship of St John the Baptist. As chairman (2007-2013), he was extremely conscientious, an examiner of detail, who always acted with the utmost integrity. He was warmly appreciative of others, praising the time and expertise that so many members gave to the Fellowship. John spent many hours on the important revision of the Fellowship constitution approved in 2013, that included the important provision that a President should be appointed in the Fellowship from among the Bishops of the Pan-Orthodox Assembly. John supported all Fellowship activities including the Youth Festivals. He was delighted to see young members coming in to take over his work.

John was a member of the Rutland and Peterborough Theological Societies and a valued supporter of the Institute for Orthodox Christian Studies in Cambridge – in all three bodies, he was well known for asking penetrating theological questions.

John appeared to be recovering slowly from a stroke, but he was too weak for the medical team to operate on a leaking heart valve and infection. He knew he was dying, but was peaceful after Father Raphael Armour, priest from the parish of St Ephraim the Syrian in Cambridge, came and ministered to him. John in his weak physical condition, listened to recorded liturgies, making the sign of the cross, so was full of faith and in communion with the Church he loved at the end of his earthly pilgrimage.

[This obituary has been written by Gladys Bland, Secretary of the Fellowship]