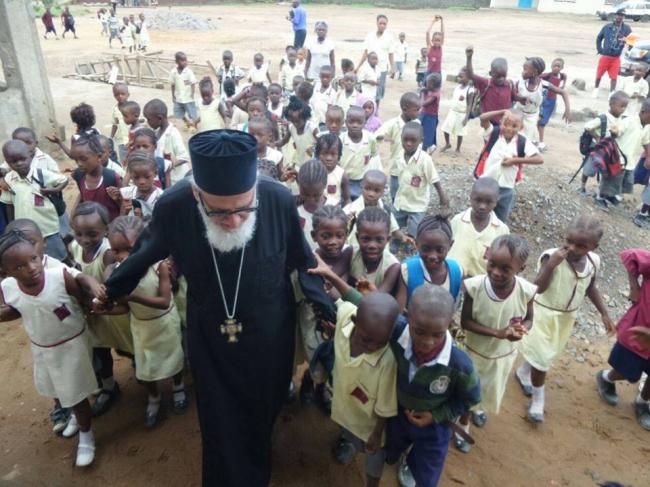 On Thursday 2nd March at 7.30pm the Mosaic Choir will be holding a fundraising concert for the work of Fr Themi Adamopoulos, missionary in Sierra Leone. The venue is the Greek Orthodox Cathedral of the Dormition of the Mother of God (St. Mary’s), Trinity Road, Wood Green, London N22.

Father Themi will also speak briefly about his mission and work with Ebola orphans.

Father Themi will also be visiting Oxford and Birmingham.

Meet the rocker, who became a missionary in Africa

During the time of the Beatles and of the Rolling Stones, he managed to form  his own musical group, The Flies. From the seminar halls of the School of Political Science of the University of Melbourne, he found himself singing next to Mick Jagger, and so realized his dream, but now he is a missionary in Africa.

Father Themis Adamopoulos, chose to help those who really need it. As he says after his studies, “I could feel a vast emptiness within me, I was not with the poor. I did not need to struggle at the time with myself. Inside me a desire flared up to live next to the poor and to do whatever possible to make their life more human. ”

In 1999 I began my work in Kenya  with the blessing of his Beatitude the Patriarch of Alexandria and All Africa, Peter, who first ordained me as a deacon, then Priest and then Archimandrite”.  That is where he founded the first Orthodox University College – the Orthodox Teacher’s College of Africa. “I believe education is the greatest weapon for a person on earth. If you wish to help your fellow person, teach him the skill to fish and not give him the fish already prepared. At the college we prepared youngsters to become kindergarten and elementary school teachers. Subsequently, we introduced a branch with Social Studies.”
He tries to provide as much as possible for the children, clothes, shoes,  meals and following on from this he cares for women and mothers. “Woman is the greatest victim in Africa. She is the heart of the family. The husband can have two or three wives and have children with all of them. The woman is the one who would even sell her body for a piece of bread, so that her children do not die of hunger. That is why we opened a School for Sewing, where women learn the art and earn their bread honestly”

Then in 2007, the new Patriarch of Alexandria,  Theodore, who had followed  the work of missionary and humanitarian Themis Adamopoulos in Kenya, ordered him to go to West Africa, to Sierra Leone, where a 12 year civil war  had devastated the whole region leaving behind untold horrors, where death is a part of daily life. He lives there, next to the people and among to the people. “Over there we are building a village for 100 disabled people who were begging in the streets and the police would chase them away”.

Father Themi, carried on his mission right through the worst aspects of the Ebola crisis that had started in March 2014. He tried to help in anyway he could. Now the crisis is thankfully over, but Father Themis continues with his work – now building orphanages for those who tragically lost all the adults in their family from the epidemic.

All this work is financially supported by two major charities in Australia, Paradise Kids 4 Africa and Paradise 4 Kids (Australia).